The most Beautiful Mountain in the World

About Alpamayo Peak: The pyramid shaped Alpamayo is considered one of the most beautiful mountains in the world. The ascent toward the peak is very steep and the majority of it is a technical climb. This mountain should only be attempted by those who are well acclimatized and who have summited of other high peaks. From one side Alpamayo is an almost perfect pyramid, covered with enormous ice shelves. The other face, the trapezoidal southwest wall, is even more beautiful. All of the Cordillera Blanca mountain range is protected by Huascarán National Park, a paradise of snowcapped peaks. The park also includes the peaks of Huandoy and Huascarán (the highest mountain in Peru), as well as 663 glaciers, 269 lakes, some 42 rivers, as well as 33 archaeological sites.

About Nevado Alpamayo Routes: Alpamayo should not be underestimated. Lessthan half of the climbers coming to the BC make it to the top.

NB: After the July-2003-icefall the conditions in Alapmayo SW-face seem to have changed.
Ferrari: AD+, 10m 70°, 8 pitches 45°, 1 pitch 55°. 5-7h.
Frech Direct: D+ 50°-65°, 10 pitches. 6-8h Start near the lowermost part of the bergschrund (1½h). After 1/3 of the ascent follow the runnel leading to the top.
North Ridge: D The route of the first ascent. Nowadays unusual due to the higher objective risks. The ridge can be gained from Laguna Jancarurish or by traversing from the col.
Descent: Rappel down the way you came respectively the Ferrari Route (snow stakes most times in situ).

Day 3: Alpamayo Base Camp - Ascend to Alpamayo Moraine Camp (4900 m)
Today we have a good breakfast and prepare the expedition equipment for Alpamayo, from here we begin using a local team (porters, cook and local guides), who will help us carry everything. We set out for the moraine after a small lunch in Base Camp. The trail takes us across the steep moraine at the tongue of the glacier to Moraine Camp (4,900 m). Overnight Camp (B/L/D)

Day 4: Moraine Camp - Ascend to Alpamayo High Camp (5300 m)
Alpamayo High Camp is on the steep glacier at the base of Alpamayo and Quitaraju. Due to the constant shrinkage of the glacier, every year we find a different situation along this section. We find magnificent views from High Camp the summit looks close enough to touch! We have dinner a bit early because we must rise very early, for the long day that awaits us tomorrow. High Camp (5,300 m). Overnight Camp (B/L/D)

Day 5: High Camp - Ascend to Alpamayo Summit (5947 m) - High Camp (5300 m) or Descend to Base Camp (4300 m)
Summit day! One possible route is the French route, a 60 to 80 degree wall of ice which narrows toward the top. . Above the wall, you need to conquer a few meters to the highest point of the narrow ridge. At the summit, you will be rewarded with a magnificent view of the Cordillera Blanca! The neighboring peak of Quitaraju (6,036 m) is almost within striking distance; and to the southwest you can see the remarkable summit of Huascarán (6,768 m.) After a brief rest and photos at the summit, we return quickly to High Camp via a rappel down the route we came up. In good weather, the climb to the summit and return to base camp can be done before noon. The ascent takes 5-6 hours, while the descent takes about 2-3 hours. If participants are tired, we can stay one more night in High Camp. If everyone feels fine, which is usual, we descend to Alpamayo Base Camp (4,300 m). Overnight Camp (B/L/D)

Day 6: Base Camp - Descent through Quebrada Santa Cruz - Cashapampa - Transfer to Huaraz
Today we rise early in order to begin our hike, descending through the Santa Cruz valley to Cashapampa (about 6 hours.) In this village our minibus awaits to take us and the local expedition team back to Huaraz. Lodging at the hotel. Overnight Hotel (B/L/-) 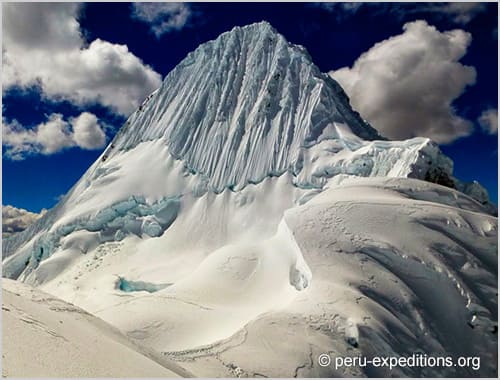 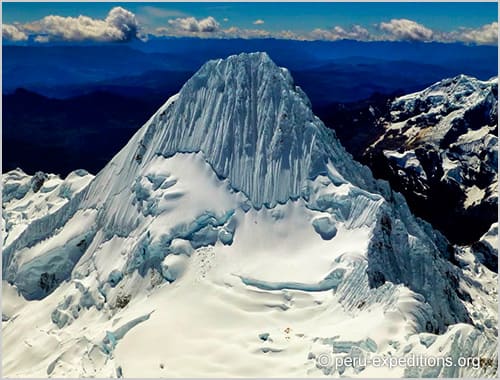 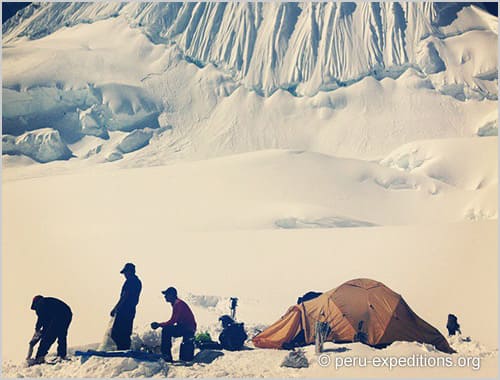 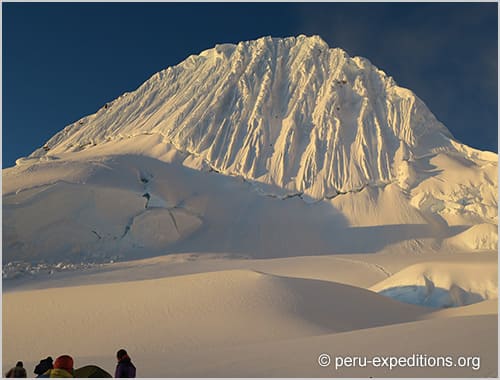 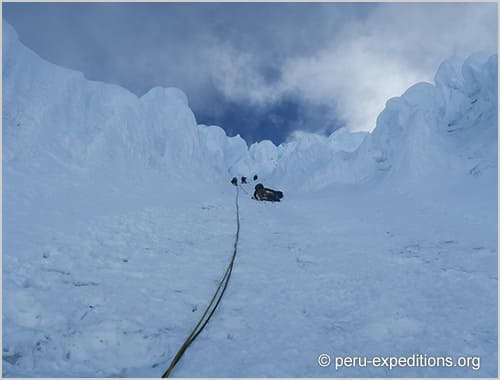 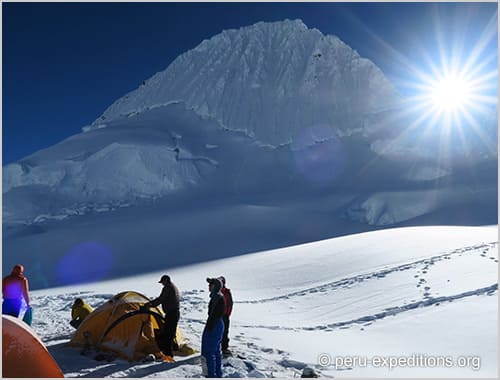 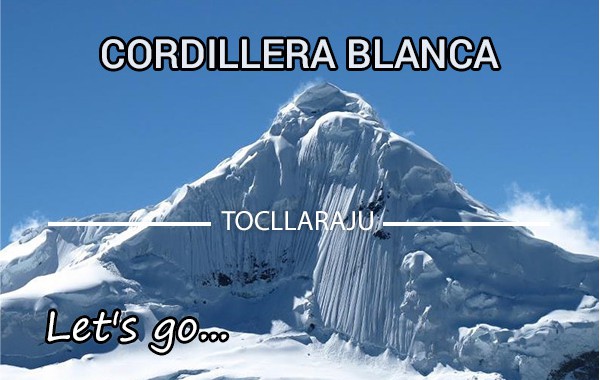 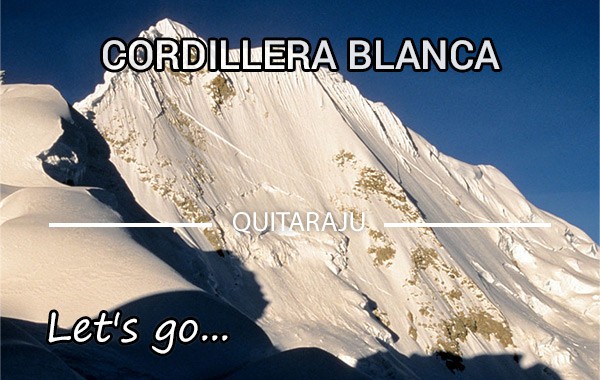 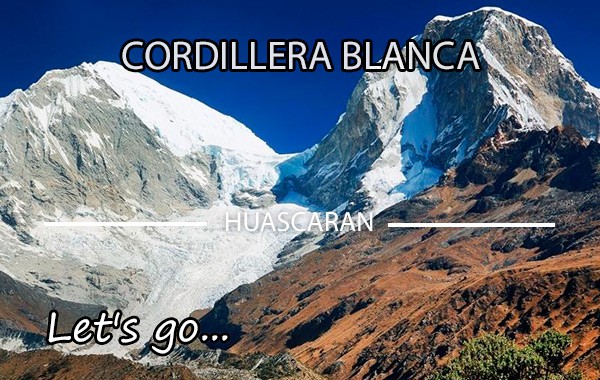